“We have to stay positive, keep our heads up and remember that there are plenty of races left where we can make up for the disappointment of today.” The words from German racer Adrian Sutil come on the heel of his early retirement along with fellow driver, Paul di Resta, at the recently concluded Malaysian Grand Prix in March, 2013.

He lives each Sunday in the fast lane of life. The speed, the sound, the wind, the crowd, and the raw aggression, all of it take over once Sutil steps into the open cockpit. My tête-à-tête with him was on an afternoon in January, 2010, when he was in Delhi. A long time before the Formula Car racer and then number one driver for Force India, the only team on the Grand Prix circuit with the Indian tricolour (and famously owned by liquor baron Vijay Mallya in partnership with Dutch entrepreneurs), was indicted in an 18-month suspended jail sentence. He was also fined €200,000 for grievous bodily harm after a nightclub brawl in Shanghai in 2011 when he assaulted Renault chief executive Eric Lux with a Champagne glass. Lux needed stitches on his neck wound.

Yes, life must have been simpler when I chatted with Sutil about where his career was headed on that January noon. It does not come as a surprise that he was subsequently dropped from the Force India team in 2011. What however set tongues wagging is the reprieve by Force India and a second chance for Sutil to race alongside the British racer Paul di Resta this season for the Force India team.

“Life as a racer is about delivering on Sundays,” pitched in Sutil during our conversation. He might not have been making a novel point (for those in the know of the sport), but it did reiterate his reigning passion. That for him, as with most dedicated racers, revolves around the circuit so much so that he refers to the Formula One team as his family. “With so much money riding on you, you end up spending all your time with the team,” he said.

Having steered his way through 2009 ensconced in a newly refurbished Force India car (it changed over from a Ferrari engine to a Mercedes-Benz engine), the German racer earned a 9th place at the season opener in Melbourne and finished the Monza race in a career-best fourth place.

The typical life of a racer, I realised that day, was about clocking the miles. The countdown for Sutil began that year with the first session of the Bahrain Grand Prix in early March.

“From there he travels to Australia, Malaysia, China, Spain, Monaco, Turkey, Hungary, Abu Dhabi,” added Otmar Szafnauer, CEO, Force India. The list seemed to be pretty long, long enough for the pen to lose track after the first few locations that Szafnauer had rattled out.

“Oh yes, it is a rather comprehensive list. As a racer you have got to be in love with the idea of flying miles,” smiled Sutil. Accordingly, he finds himself travelling almost every week of the year.

“When the season starts, I get to spend only two days at my home in Switzerland. But it works perfectly for me because I do tend to get bored easily,” he added.

The team Tee that Sutil wore was emblazoned with sponsor names and tucked into casual denims, giving him an all-sporty look. But that is till you caught a quick glance of a high-end fashion label logo — that of DSquared — bold on the buckle of his belt. It did not make it too tough to figure out the young racer’s affinity for fashion.

“I love adding fashion to my wardrobe. Mine is the rockstar look. And I like almost anything by DSquared,” said Sutil. That very evening he walked the ramp for Indian fashion designer Mandira Wirk and fessed up about his fascination with the traditional bandhgalas. 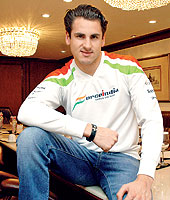 There was a self-assured air about Sutil. He battled questions with ease and was nonplussed by anything that came his way – the smoothness probably stemming from the regular media briefings he’s used to during race weekends.

“There is a whole lot of it during the weekends in any Grand Prix. A typical day in my life would go thus: Waking up early, gymming, finishing breakfast and hitting the tracks by 9am. There is a quick succession of meetings with the physiotherapist, briefings with our engineers, driving, more briefings followed by interviews with the media and sponsor commitments, more briefings and then back to the hotel,” he noted.

So akin to his fellow merchants of speed (read: Kimi Räikkönen, Lewis Hamilton, Fernando Alonso, Sebastian Vettel), Sutil tanks up on energy at his green countryside home in Switzerland.

“With much of the time spent travelling and living in the glare of city lights, I need de-stress time in Oensingen. I like to be home alone. And when I am home I also drive around in my white Porsche Turbo. It’s my baby,” he pointed out with a wide grin.

The 30-year-old’s tryst with the racing track goes back to the time his older brother took him karting – Sutil was 14 at the time and a skilled pianist with music in his genes. His father was a violinist with the Müncher Philharmonie and his mother a talented musician.

With his first brush with motorsport, however, he knew where he wanted to be. “Playing the piano paled in comparison,” he noted.

He had the attention of the motorsport world in 2002 when he won the Formula Ford Swiss championship with 12 wins in 12 races in his first season in single-seater motorsport. Within two years, the German racer had graduated to the Formula Three Euroseries, securing four podiums in his maiden season.

A significant point in his career was in 2005 when he ended his second season as runner-up to Lewis Hamilton (2008 F1 world champion) with 11 podiums in 18 races. Sutil moved Far East to compete in the Japanese F3 championship in 2006. It turned out to be a good year for him. He had his first international title with five wins.

The same year he joined the Midland F1 team for practice sessions and that was where his turning point came. He was signed on a multi-year race seat contract starting 2007 when it became the Spyker Formula One Team. Not only did he mark an impressive performance at Monaco, but he bagged the first world championship point, both for himself and his team, in a rain-lashed Japanese Grand Prix.

In 2008, the team changed hands and was acquired by Mallya and company, when it came to be known as the Force India team. At the time I interviewed him, Sutil’s contract had just been renewed by Force India with Italian racer Vitantonio Liuzzi as his teammate.

He is ranked 7th on the F1 list (post the Australian Grand Prix) and known for his penchant for risks. Some refer to him as ‘an accident magnet’. Bite this: In a particular Formula BMW, he was threatened by the organisers to have his license confiscated when he flew over another car.

A high-flying adrenalin rush seems to be an addiction of sorts for him as he proclaims most new tracks to be ‘too safe’ for a sport that is alluring because of the risk associated with it.

His dream team? According to Sutil, in the world of Formula One, one can make his own dream team. He pointed out: “One has a lot of power as a driver. I want to grow together with the Force India team. Let’s hope both of us should be in the front row soon.”

(A version of this story was published on January 24, 2010, in The Telegraph)