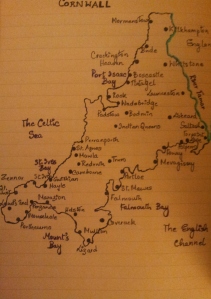 Cornwall romances the soul. It sweeps it off its hapless feet. So, every time that we are in its vicinity, we find ourselves heading for a sight of its turquoise blue waters, not unlike the tipple-happy craving for his drop of intoxicant.

My first shave with Cornwall was in the summer of 2012 when I made home in the small island of Britain with my husband. On a sunny day, sans a speck of cloud, we concocted a bit of a harebrained scheme with our friends to head off to the south west part of the country. It acquired the status of barmy the moment we sallied forth without bookings.

If you have lived long in Britain, you would know that bed and breakfast/hotel bookings are made months ahead. A month is forgivable. But executing a spur-of-the-moment weekend trip, especially on the very verge of a bank holiday, is akin to committing travel hara-kiri.

During a brief stop in the historic town of Bath, we realised our folly. It led to an extensive exercise in researching online. Nothing turned up except an expensive night stay at a bed & breakfast in Port Isaac.

One worry was taken care of. Yet another replaced it with alacrity.

At a gas station stop, a friend refuelled one of the diesel vehicles with petrol. It was not a happy moment for the six of us. The worst struck was my friend and I – we had chugged liberally on cans of lager. Traumatic four hours later, weaving our way through the pitch dark and narrow country lanes in Port Isaac, we reached Longcross, our bed & breakfast shelter for the night.

It was midnight when we entered Longcross, much to the disapproval of a surly host. A little to my alarm, we were upgraded to the Love Shack, a small ivy-clad cottage in the garden. Picture this: A coded gate opens into a garden path that is flanked by tall, manicured hedges. It is a moonless night and there are no lights whatsoever to mark the way, while a fat, black tabby insists on trailing us everywhere.

I was ready to take flight.

The cottage, supposed to be an enviable little shack for lovers, was ironically passed over by both couples and the two men in the group had the pleasure of the honeymoon suite for the night.

The garden path at Longcross

In the morning, however, the quaint hotel showed up in a different light, overlooking as it did some 20 miles of the North Cornwall coast. The sight of a gay wedding with the works — guests in their wedding finery and free-flowing champagne – dispelled the disquiet of the night before.

Our stop in the picturesque village of Port Isaac was at a sprawling strawberry farm, where we ordered up a huge feast and soon to our delight found ourselves at a table laden with a hearty breakfast of blue cheese and chutney paninis, scampi and burgers.

Now, when you are in Cornwall, do as the Cornish do. Though it can weigh down your stomach and make it balloon when you decide to dig into the traditional pasties. The side-crimped, baked pastry has its origins in the mining days when Cornish miners carried pasties as packed lunches. My recommendation is to nibble into half of it and wash it down with a hearty, local beer. How about a Cornish Knocker?

The steps leading down from Tintagel Castle 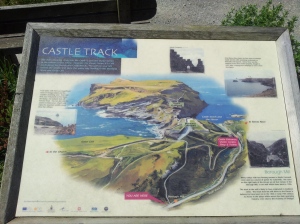 The county of Cornwall is home to one of the most spectacular castles that I have seen. Steeped in legend, the castle is positioned strategically above rugged cliffs and once you climb the 200-odd steps to the top, it sets the senses on an overdrive along with a generous dose of breathlessness. If my imagination was stoked by the Arthurian legends — Tintagel is believed to be the birthplace of King Arthur — the rigorous climb was made worth my while by the view. A multi-hued Celtic Sea, with colours spanning the range of brilliant turquoises to emerald greens and deep aquamarines, on a bright sunny day, is a sight not to be missed.

And it was most tempting to give into our sense of adventure and make our way down to Merlin’s Cove which we explored even as the tide slowly set in. Its dark, damp interiors took me back to childhood days spent reading Enid Blyton and her pack of young adventurers who almost always managed to get caught in caves like these with backpacks stuffed with tins of peaches, ham and boiled egg sandwiches.

If you like hunting down souvenirs to take home, like I do, go for piskies (read: pixies outside of Cornwall). Cornish folklore introduces them as small old men with wrinkled faces and red hair.

It is good luck to gift a friend a piskie. So my friend and I, gifted each other a piskie. It was a small golden piskie that is now on a black thread ready to be worn as a cutesy pendant. And don’t forget: there’s even a Piskies Cove near the Lizard Peninsula which is a secret backwater of sorts in the south of the county.

But if you want to go where well-to-do Londoners do, head for St. Ives in the south west.

Our first sight of St. Ives was dramatic. Descending in our car down a rather steep incline, I couldn’t help squealing with pleasure at the vision of the turquoise waters. The beach itself was full of curly-haired tots playing with sand, men and women sunbathing, and young girls playing in the waters which were so icy that I could not feel my legs after wading into them. A small note of caution: from experience I can say that skipping down the wet stones of the cliff is a strict no-no unless you want to slither down mossy steps all the way to the beach. It can be a painful proposition.

Need a leisurely tea break? I would recommend cream tea, that is, tea had with scones, clotted cream and jam. Even though rare now, keep an eye out for the traditional Cornish way of having cream tea with the ‘Cornish split’, a slightly sweet white bread roll instead of a scone.

A wonderful place to watch the sunset is Britain’s most southerly point, Land’s End. It’s here that the north coast meets the south coast and the Atlantic Ocean stretches right to the shores of America.

We watched the sunset at Land’s End and read random plaques including one which I remember distinctly. It was dedicated to a man who had biked his way from Land’s End to John o’ Groats (which is at the extreme northern end of Scotland), covering a distance of 970km.

What it all winds down to is that there’s no prescription for a marvellous trip. We ended up staying in rooms on a university campus near Penzance, scampered off to vintage motor fairs in Porthleven, and post-midnight, wolfed down meat doners in Turkish joints along with drunk students in old mining towns like Redruth — but there’s no other way I would explore the land of the piskies and the pasties.

(A versions of this story was published on August 12, 2012 in The Telegraph)

Pix (except Dancing Piskie) and sketch by the author