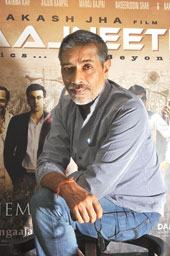 Prakash Jha is a man of his milieu. Unabashedly so.

The acclaimed filmmaker invests his hopes in cinema that is not candied romance. Neither is it of the experimental variety conjured up by the avante garde. Instead he delves into the very depths of the Hindi heartland with the thoroughness of one who has grown up a witness to its machinations.

When the lights go down in the theatre, a Jha film takes you into a land of no redemption. Where the darkness of society, as the filmmaker knows it, threatens to overwhelm the soul.

The cast of Rajneeti

I met the man in Bombay about the time he had just released Rajneeti — his most expensive film till date. What’s more, it was all the talk in tinsel town. Huge posters of the film, with faces of its stars — Ranbir Kapoor, Katrina Kaif, Arjun Rampal, Nana Patekar, Ajay Devgan and Manoj Bajpai — stared down at you from almost every hoarding in town.

The political drama that haunts and engages the mind at once with darkness all the way through – for there is no redemption in the film — passed muster with the critics.

As if on cue, a steady stream of bouquets, of lilies and orchids, made their way into the various nooks and corners of the office.

There is a certain je ne sais quoi about the filmmaker. He has a candid response to most queries that are thrown his way — a rare quality to encounter in tinsel town.

Label him a filmmaker and he throws you off balance for a moment with his take on the subject — just as he startles with the formidable darkness inhabiting his brand of cinema. “I think I still need to learn to be a filmmaker,” he pointed out.

You’d almost be forgiven for imagining it to be faux modesty. After all, Jha has a cache of some eight national awards to his credit. But reclining in a chair inside the almost homelike comfort of his office in Andheri, the down-to-earth director offered reasons to make good his claim.

“I do not explore the cinematic language as some of my contemporaries like Vishal Bhardwaj, Anurag Kashyap and Madhur Bhandarkar. They are passionate about their language,” noted Jha, dangling black-framed reading glasses from his lips thoughtfully. He reckoned himself as an observer.

“It is my most complete film till date,” said Jha referring to the film that reportedly cost him Rs 60 crore.

“It required a much bigger canvas. For the state election to take place, I had to put together crowds, the big town look, the location. The shoot went on for 103 days in Bhopal and you have to keep in mind the strong cast. The cost was bound to escalate,” he points out.

He approximates the experience of making Rajneeti to the kind of ‘trip’ he felt while working on his erstwhile art films like Damul (1984) and Parinati (1986).

The reason he looked forward to the sets every day, emphasizes Jha, was the ‘gritty feel’ he endowed each frame with. He engages not merely in the flotsam and jetsam of politics, but a darkness that while haunting modern India would induce it to think.

He made his debut in feature films with Hip Hip Hurray in 1983 starring Raj Kiran and Deepti Naval, but earned great acclaim with Damul in 1984. The film, based on bonded labour in Bihar, won him the National Film Award for Best Film and the Filmfare Critics Award for Best Movie the following year.

Ajay Devgan in a still from Gangajaal.

Social evil won as the subject for most of his forthcoming titles such as Mrityudand (1997) that had actresses Madhuri Dixit and Shabana Azmi in lead roles and explored the issue of social and gender injustice. Then came Gangaajal (2003) that explored the police and public relationship through the lead character played by actor Ajay Devgan.

Jha followed it up with Apaharan in 2005 that starred Ajay Devgan and Bipasha Basu and based itself on the growing kidnapping industry in the Hindi-speaking belt.

“Yet I have made more documentaries than films. Rajneeti is my 10th feature film,” observes Jha who has made a considerable number of over 25 documentaries, a couple of television features and a few television series besides his lot of socially conscious films.

With 35 years of experience behind him however he is unfazed by the controversy that he courted since his first documentary in 1975.

“When you make a film in the public domain, everyone will have an opinion. You have to live with it. I ignore it until I have to face it,” smiles Jha.

He remains nonchalant and brushes aside most of the controversies that have dogged him with the release of Rajneeti – Congressmen have accused him of portraying Sonia Gandhi through the character played by Katrina Kaif.

The film which draws heavily on the epic Mahabharata for reference, also seems to carry echoes of Jha’s own tryst with politics.

He emphasizes: “For me, politics is development. I wanted to assert and re-assert the point that we have to engage very seriously in the democratic process. The one who feels that he can lead and make a difference, he should not sit on the fence but come in and fight.”

Adds Jha: “My engagement with Bihar is to try and set up a few good things and make a few investments. The problem with the state is that nobody wants to invest time, money or intent in it. Even the Biharis go and invest outside Bihar. To be an MP would mean to be in a position where I could have had access to resources.”

To the effect he started a news channel called Maurya Channel in the early half of 2010. He is also in the process of setting up the first multiplex mall in Patna.

Jha’s political engagement goes back to the year 2004 when he fought and lost elections to the Lok Sabha from his village Champaran. The next time he contested as a Lok Janashakti Party candidate from West Champaran in 2009, but lost again.

“I lost the first elections because it was a very late decision, plus I was not contesting politically. My next move politically faltered because I was on the UPA side. No one anticipated the Congress’s currency rising through the elections,” says Jha.

But surprisingly it is quits on the political front for him.

Says Jha: “I am pushing 60 and there are a lot of things I want to do – like playing the piano, flying a plane, going back to my paintings (the reason I came to Mumbai in the first place) and making a lot of movies. Public office would require the commitment of time and intent which I would not be able to give. So indeed, the last election was my last.”

The man’s own story is filled with adventure. Belonging to a Brahmin family in Champaran, Bihar, meant that he was all set to become a civil servant. “It was a kind of a hole. I hated it. I didn’t want to pursue the civil services, get married and raise children to do the same,” he points out.

Films happened to him as a ‘pure accident’. He had competed in the National Defence Academy exams in 1969 but opted out of it because he wanted to do something different. Thereafter he got enrolled at Ramjas College in Delhi University and studied physics. But he took off from there too in the first year itself to return home.

“In 1970 I was working on the family farm. I told my parents that I wanted to become a painter. They couldn’t understand it at all. Finally one day I realized I needed to move on,” he says. It was the day he boarded a train for Mumbai with Rs 300 at hand.

His objective at the age of 19 years was to join the J J School of Arts. Meanwhile he did odd jobs to make a living. He made friends with a building contractor and wrote his accounts. With the rest of his time, he imparted English lessons to Gujarati businessmen.

At about the same time Jha met an art director (who had worked in the epic film Mughal-e-Azam) and impressed him with some photographs he had clicked with his Minolta camera. He invited Jha for a shoot of Dharma, a 1973 action flick by director Chand.

“It starred Pran, Navin Nischol, Bindu and Rekha. That day was phenomenal. I had reached the sets around 9 o’clock in the morning. I stood there for 12 hours. The whole ambience and the way it all was – that was my moment of epiphany,” says Jha.

He acted on it immediately and got himself a job as an assistant director with Chand but the director had 12 others assisting him. So assisting translated into moving chairs and making tea as a spotboy.

“That schedule lasted for four days during which time I realized I would never become a director as an assistant there. So as soon as the schedule ended, I went to Pune and found out about the Film and Television Institute of India (FTII),” recalls Jha.

In between the time that was left for admissions at FTII, he got admitted into KC College, Churchgate, Mumbai, for an intermediate degree.

And to make a quick buck he ended up as an assistant manager in a restaurant.

“My job was to be there first thing in the morning, get the cooking done and be the last man to leave. Any time that I got off, I would rush to Akashvani Cinema to catch the late night classics,” smiles Jha. “And believe this or not, the guy whose restaurant I was employed in, he works for me today. I guess that is how relationships continue.”

His lifestyle has changed a few folds since then — to the extent that he has no count of the number of cars he owns. “There are several companies I have including a real estate company, a news channel, a production house and a television production house. There are 500–odd people working for me. They buy cars now without often me being in the know,” he says.

There are a few projects in the offing to keep Jha busy even though he has picked up forms for piano and flying lessons. He is wielding the cinematic pen on a couple of subjects. While one happens to be on the issue of reservation in the country that he has titled Aarakshan, the second focuses on a triangle of relationships.

“When we talk about reservation in education, in jobs, in the private sector, for me it becomes a reservation of opportunities. Aarakshan is about a college principal’s dilemma,” elaborates Jha.

Aarakshan released in 2011 with a roll-call of names: Amitabh Bachchan, Saif Ali Khan and Deepika Padukone.  Jha’s latest offering in the offing is Satyagraha, a film that shows the rise of the middle class against a corrupt system.

But he is still striving for simplicity of narration in his mode of storytelling. “I would like to think that maybe in the next film my language will get better, my narration will get better. Simplicity is the key, no matter how difficult the subject. The day I can tell my story to a 5-year-old and keep him hooked on — that would be it.”