Herds of hefty Shorthorn cows lord it over the lush, green slopes of Michinhampton Common.  A few metres away from the idyllic scene stands ‘Winstones Cotswold Ice Cream’, an ice cream shop which uses the yield of the beauteous bovine you behold on the gentle, rolling hills of the Cotswolds. A spoon of its honey and ginger ice cream — bits of racy ginger spicing up the sweetness of organic honey in a poetically, creamy texture — will leave a serious indent on your pick-me-up memories.

A love affair with British ice cream can take off thus in the heart of rural England. It can also find its way in to London’s gourmet food district in Borough where a young quartet of professionals experiment with goat’s milk under the pennant of Greedy Goat.  They send your taste buds into an overdrive with dollops of raspberry chilli ice cream.

Old-fashioned, full fat ice creams are becoming a way of life on the island. Forget those frozen treats, batches of which are whipped out of re-constituted skimmed milk powder and vegetable fats. British ice cream entrepreneurs are going back to the revered, traditional ways of making ice cream with fresh, natural ingredients. 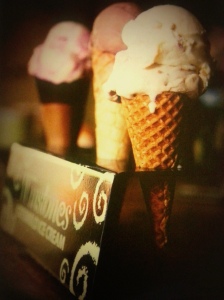 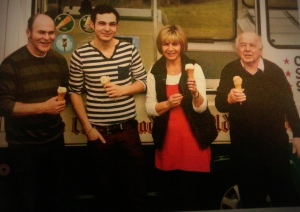 A common premise marks the luxury treats made by both artisanal ice cream producers and farmhouse ice cream makers. “Whole fresh milk and double cream are basic to the process of churning quality ice creams,” points out Sarah O’Mahony, marketing manager at Yorkshire Dales Ice Cream (www.yorkshiredalesicecream.co.uk). The farmhouse fresh ice creams, made by the family for over six decades now, use the produce of Charolais cattle.

The twist in the affair is this: Owners Gary and Amanda Rogers transport you across the pond with a retro 50s’-style ice-cream parlour called Billy-Bob’s Parlour. With nostalgic trappings — a shiny airstream serving espressos — reminiscent of a simpler, happier era, they serve up natural flavours like English Strawberry, Summer Berry and Blackberry.

The au natural way of making ice creams is a must with the Bakers, a tenant farmer couple whose farm is part of a 300-acre Crown Estate tenancy. On the north eastern edge of the Exmoor National Park where the family has farmed for over five generations, David and Sue Baker started selling homemade ice creams under the brand Styles Farmhouse Ice Cream (www.stylesicecream.co.uk) in the late ‘80s. They use whole fresh Jersey milk and West Country clotted cream from a recipe developed by Sue in her farmhouse kitchen. Their hotselling flavours are Stem Ginger, Mango and Cream, Chocolate and Cointreau, Rum n’ Raisin and Coconut.

The Bakers fall back on their own set of golden rules. They do not make ice creams they do not like and they use ingredients in their ice cream that they would give their own children. “We strictly use fresh ingredients such as coconuts, strawberries, ginger and mangoes. The emulsifiers and stabilisers, which prevent the ice cream from turning gritty and grainy, are made from natural weeds and nuts,” points out Simon Stokes, commercial director with Styles.

Most importantly, quality check is done the old-fashioned way. With a spoon. “It shows on David and mine ever expanding waistline. There’s passion in what we do,” chuckles Stokes.

In the interiors of Cornwall, in the stunning landscape of the Lizard peninsula you come across an organic farm owned by Roskillys (www.roskillys.co.uk). Toby and Silke Roskilly, the couple behind the brand, have been making ice creams for about two decades now. They use the milk of the 125-strong herd of Jerseys that feed on their clover fields in Helston. Keep an eye out for the Cornish Cream Tea ice cream that has bits of scones and jam swirled in and the Salt Caramel ice cream.

Toby Roskilly with Caramel, the cow, on his farm in Helston

Cream tea ice cream. It has bits of scones and jam swirled in

“When we started out, we were ‘artisan’ makers – making ice creams on a small scale, the way a gelateria in Italy does,” says Toby. “It was all in the effort get more value out of the milk. Now the ice cream supports the farm. The hedges are still bushy and brimming with wildlife.”

Wacky and experimental are the two watchwords in the culinary spectrum ever since chefs started marrying the strangest of ingredients in their kitchens. If Spanish chef Ferran Adria could whip up parmesan ice cream and British chef Heston Blumenthal come up with a rare mustard ice cream, why should our friendly ice cream man stay behind in the race?

Whoops of astonishment, spells of confusion – expect a bouquet of emotions when you dig into the scoops that some of them have up their sleeves.

When four young friends come together with a bunch of freethinking concepts, you have something on the lines of a Greedy Goat (www.greedygoat.co.uk). Selling ice cream on the weekends from a stall in Borough Market – they have regular jobs to keep busy with during the week – Toby Monk, Tom Hutchinson, Mark Thomas and Craig Allen marry unusual ingredients. Expect strange combinations such as raspberry and chilli, lime and basil, and, a strawberry ice cream paired with balsamic glaze.

“Just being in Borough is food for thought. When we introduced a neutral ice cream with powdered green tea, it stemmed from a chat with a green tea seller in Borough. When we started drizzling olive oil on our pistachio ice cream, it was because of a random conversation with the olive oil trader,” points out Monk. 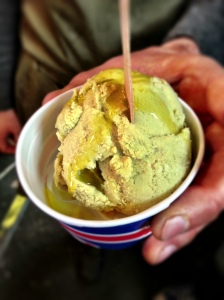 They are artisanal ice cream makers, sourcing the milk from a pedigree of Anglo-Nubian goats in Essex. “We hand make our ice creams in small quantities using natural and local ingredients. A number of factors decide our flavours each week — the weather, the week and what events we may be participating in,” notes Monk who started the brand with his friends in 2011.

Into the English countryside, in Dorset, you stumble upon delicious creamy treats by Purbeck’s (www.purbeckicecream.co.uk). Was that the sharp taste of blue cheese? And, the scoop in your friend’s hand – it smacked of watercress. Could it be possible?

At Purbeck’s, Peter and Hazel Hartle started producing ice cream 25 years ago, to save their herd of Friesian cows. Over the years, they have become adventurous with their flavours. “Two of our ice creams – the Dorset Blue Vinny made with the blue cheese from Sturminster and the Dorset Watercress – won us awards. For the Dorset Apple and Cinnamon flavour, we use apples from our orchards on the farm,” says Hazel. 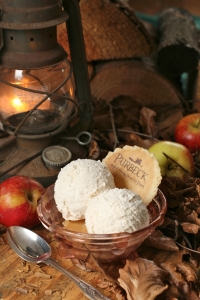 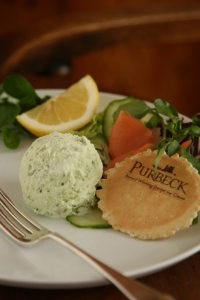 In the Winstones’ part of the woods in the Cotswolds, the community is made up of the English, French, Dutch and German residents who want intriguing flavours. The brand that was started by a French polisher called Albert Winstone in the 1920s sells flavours such as blackberry, honey and ginger and rhubarb crumble. But come winter, they overhaul the entire range. “We sell ice creams even when the sun does not shine,” smiles Vear. Soon their menu shall read Spiced Plum, Apple and Cinnamon, Christmas Pie, Christmas Pudding and Mint Pie. 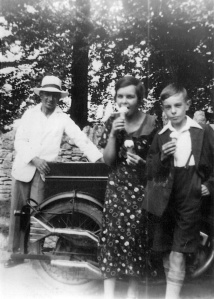 Albert Winstone (on the far left)

With most of the ice cream makers travelling extensively for inspiration, there is an emphasis on Indian-inspired treats. Monk is contemplating and speculating on how to use mangoes from India and play around with the kulfi at Greedy Goat.

“At Styles, our Mango and Cream is made with Alphonso mangoes sourced from India. The Stem Ginger is also inspired from our trips to India, just like last year we spent our holidays in Karnataka, Tamil Nadu and at some tea plantations,” says Stokes.

These select bunch of ice cream makers source their produce locally. They also make no qualms about being ingredient-obsessive.

“The movement towards local food has stoked the need for information. People find comfort in knowing where a product comes from,” says Colin Vear, General Manager at Winstones (www.winstonesicecream.co.uk). Tucked away in the charming and least commercial district of Stroud, the shop that you see today on Rodborough Common was started in 1925 by Albert Winstone, a French polisher for a local piano works in the Cotswolds. His grandson, Frank Vear, now heads the business.

For their ice creams, the Bakers insist on evening milk because it, according to them, tastes better than morning milk. On the other hand, Yorkshire Dales Ice Cream boast of SALSA accreditation (Safe and Local Supplier Approval) – an assurance that throughout the production process they adhere to strict food safe practices.

And, to get their recipes in place, the Roskillys took lessons in the construction of an ice cream from an expert from Holland. Says Toby: “It has taken us 20 years and many trials and experiments. But now we make almost all the ingredients in our ice cream – from the sticky, saucy and crunchy to the nutty, fudgy bits in the ice cream.”

But is there a perfect formula out there? “We have more than our fair share of rain which the islanders moan about, but it does encourage the lush, green grass that our cattle graze upon and produce such fine, creamy milk,” points out Stokes.

Others think it is the art of honing the process of ice cream making. As Toby Roskilly puts it: “I think we have borrowed, stolen and learned from all the world, unfettered by the traditions that shackle others, until we have formed our own way of doing things to make the best ice cream.”