A sense of expectation hung ripe in the air. Mingled with the anticipation of my co-travellers, it seemed to intensify as we climbed winding hilly roads, leading to the most northerly island in the Inner Hebrides, in our four-wheel drive. At a certain point, the road appeared to swoop into nowhere and head straight for the clouds. Fancy lent credence to the imagination that we were being transported to the time when Norse men inhabited the Isle of Skye and called it Skuyö, which translated means ‘isle of cloud’. It might as well have been the fatigue of driving 14 hours at a stretch, essential breaks thrown in, that made us take refuge in flights of fantasy.

An archipelago off the west coast of mainland Scotland, the Inner Hebrides is home to the spectacular Skye, apart from a swathe of other isles.

Even the most bombastic adjectives fall short once you hit the remote isle while driving down the road from the Kyle of Lochalsh. Adding a startling quotient to the isle’s dramatic landscape of miles and miles of bleak moors, beautiful lochs and white sandy beaches are the misty Cuillin Hills. 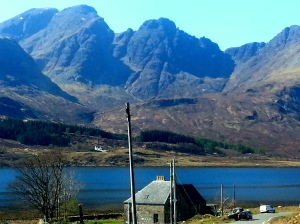 Jagged edges add a distinct personality to The Black Cuillin that rise above the sea at 3,000 feet and was once a great volcano. The black igneous rock called Gabbro, and basalt, of which the peaks are composed of, were eroded with time to give way to a texture that allows the perfect grip for mountain climbers. Locals say that the brooding Black Cuillin were created by the sun god. He burned the ground so intensely that great blisters arose, and to this day they have not cooled enough to allow thick snow to settle.  In contrast, the Red Cuillin, formed from granite that in certain conditions assumes a red tinge, look tamer with their rounded outline.

The Isle of Skye is about the vast outdoors and there is a remote wildness to it that is palpable. It was befitting in the scheme of things that our cottage should be placed right on the peninsula of Waternish in northwest Skye. From the conservatory of the cottage, we had a view of Loch Bay that almost always made us feel like we were part of a fantastic filming location. We occupied the annexe bit of the cottage which overlooked a gushing stream cutting through green rolling fields. They were populated by fat, woolly sheep during the day. I had to really curb my wayward instincts to chase them all around the place. Because boy, from experience I can vouch for it, they can run and how they do run. Let their girth not deceive the casual onlooker.

The high point for my partner during our Skye jaunt was an afternoon spent at Talisker Distillery in Carbost. On the shores of Loch Harport in the Minginish Peninsula, this is a distillery with a view. Of course, having a 30-something man breathing down your neck about his precious single malts is distracting. The view had to take a back seat. 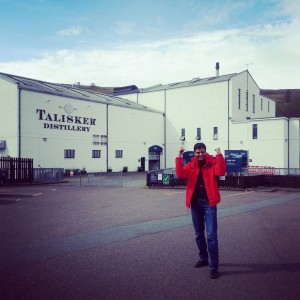 My husband ‘s delight at reaching Talisker is obvious

A roly poly highlander walked us through the distillery – it included finally seeing and smelling peat – acquainting us with the malting process and the various gigantic casks. At the end of it, we found ourselves sipping a small peg of single malt each that was fairly spicy and delicious.

Our pockets considerably lighter after a single malt-buying spree at the Talisker shop (you just cannot resist it if you are a whisky aficionado, or so my husband insists), and armed with ravenous appetites, we drove uphill to The Oyster Shed, a farm shop. “We grow our own oysters in Loch Harport below. You can learn to shuck oysters here,” was the kind offer from the man behind the till. But we were content to sit outside the shed with smoked salmon butties, a view of the Cuillins, and neighbours feasting on buckets of langoustines and mussels.

The Oyster Shed in Carbost

This was our holiday of leisure. We did not rush from place to place. We sat at places, took in the view like we had left behind the cares of the world and romped around without stressing about a list of To Dos. But we did manage to drive around the isle in the four days that we had on it.

The Isle of Skye is deceptive in its proportions. It is fairly big and wreaks much of its magic on travellers with its natural formations. The most photographed landscape on the isle has to be The Old Man of Storr, a 50m-high pinnacle of basalt rock, in the Trotternish area. There is a legend to it – that the Old Man was a giant who had lived in Trotternish. When he died, he was buried with his finger sticking out, thus creating the ridges. I was as enchanted by the Quiraing, a part of a landslip on the northernmost summit of the Trotternish ridge that is still moving and needs repairs every year. I had to let my imagination take over to do justice to the tales of yore that say that the highlanders would use the folds in the Quiraing to hide their cattle from Viking raiders. 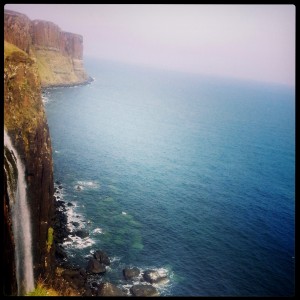 It is difficult not to be wooed by the various landscapes of the Skye, such as the Kilt Rock in Trotternish. It is a sea cliff that resembles a kilt, its pleats formed from vertical columns of basalt and sills of dolerite cutting through to complete a plaid pattern.

We did flit through the big town of Portree (which incidentally was the home of the Quidditch team, ‘The Pride of Portree’, in Harry Potter’s hallowed world) with its pretty little harbour flanked by colourful cottages. But the day that we took off for the Sleat peninsula in the south of the isle was filled with drama. A motorcyclist had died in an accident on the road to the Sleat that morning and we were diverted through a B-road that was as narrow as a ribbon and skirted the edges of a loch. Driving down that road blocked with incoming and oncoming vehicles, we had a few heart-stopping moments.

The Sleat is home to one of the two major clans on Skye – the clan MacDonald — and the Armadale Castle is the ruined, former country house of the clan. Roaming through its beautifully maintained gardens, I could not get enough of the view that the castle commands across the Sound of Sleat. Even though it was destroyed in a fire, I could not imagine the clan not wanting to live on 20,000 acres of land with a view as it has.

Another day, we went looking for otters. The lady at the coffee shop near Dunvegan Castle had assured us, “Oh there are plenty of them out there. Hundreds of them can be spotted across the beach.” After exploring the area around the castle which has been and continues to be the seat of the clan MacLeod for over 800 years, we tripped down to Tràigh a’ Chorail, a coral beach just north of it. As luck would have it, we looked high and low. But no, there was not a single otter to be seen from amongst the hundreds who are supposed to turn up there regularly. And for the record, Tràigh a’ Chorail is not really a coral beach but made up of bleached skeletons of Red Coralline seaweed or Maërl. Yet it is a beautiful white beach with volcanic rocks for perfect contrast.

Our encounter with a known native of the highlands did make up for the earlier disappointment. In the scenic village of Uig, on the west coast of the Trotternish peninsula, we chanced upon a comic Longhorned Highland. When I first saw the shaggy cow’s profile, he seemed to have one horn rising high into the air, till I happened to meet him up front. It turned out, he did have another horn. But one that pointed towards the ground. He had a few stalkers, so he swayed right into a muddy field by the sea, exasperated with the amount of publicity he was courting. And no, I did not try and pat him. They say on the isle that the wild highland cows are to be left alone, especially if they have their young ones by their side. You never know when they want to toss those gigantic horns and make a go at you. 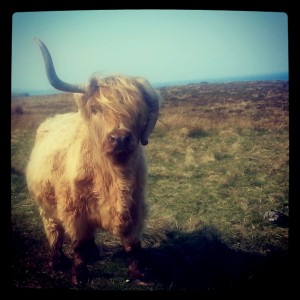 Now, do you spy the other horn?

All over the island, we were confronted by the traditional Gaelic tongue. The Gaelic name for every place was unpronounceable and though I cannot get it right, I like the poetic ring that the Isle of Skye has in Gaelic — Eilean a’ Cheò or the island of mist. It does take you into another world altogether. Add to it the fact that the isle even has some fairy stories attached to it. There are the well-known fairy pools, a series of waterfalls and crystal clear pools surrounded by rocky cliffs, walls and lush foliage. While some three miles from Dunvegan Castle is a Fairy Bridge where it is said that a MacLeod Chief’s fairy she left him to return to her land. She gave him the Fairy Flag before leaving, promising him help when he waved it in times of danger. The flag flies on the castle today.

There are still places left on the earth which are far removed from civilization. It is a feat difficult to achieve, you would think, in this global village of a world, yet these little pockets exist on the world map. The Isle of Skye floats on such a surreal realm.

The last evening of our trip, with the strong wind in our hair, we sat outside with our glasses of wine, watching the sunset at Waternish and then lay down on the soft, springy grass to stargaze into an inky sky, by the waters. The extraordinary beauty of the isle makes me echo British rock band Jethro Tull which sang a song in the isle’s beauty, “Come with me to the Winged Isle, / Northern father’s western child/ Where the dance of ages is playing still/ through far marches of acres wild.”

(A version of this story was published in The Telegraph on June 15, 2014, and in Shubh Yatra (the Air India’s in-flight magazine) in its September 2014 issue)

3 thoughts on “An Isle of Mist”