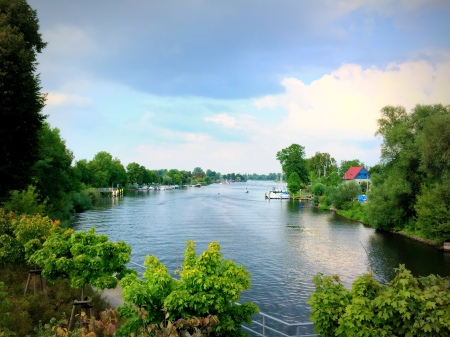 There is something rather tantalizing about the quiet of small towns. They make me feel like I have taken a step back in time as I chart winding lanes, peep into derelict houses to find handmade dolls staring back at me through dusty window panes and make the inevitable stop at cosy cafés to tuck into local delicacies.

In the vicinity of Germany’s gritty and hip capital of Berlin are two unmissable towns. Brandenburg an der Havel (Brandenburg on the Havel) and Potsdam are relatively untrampled on the regular tourist circuit but they transported me into the world of Prussian royalty.

Over a 1000 years of history awaited me as I chose to step into the historic town of Brandenburg which lies on the river Havel. Reaching it, we sat in a tram that trawled its way through cobbled roads, passing alfresco-style eateries on pavements where young men and women sat drinking under the morning sun. It was too cheerful for us to be seated inside the confines of a tram. Therefore, dragging my husband (walking is not his favourite activity, but he is getting there) in my wake, I set off to explore the alleys and back streets of Brandenburg.

Brandenburg lends it name to the state that it lies in. The state was once a medieval Bishopric and a Margraviate (the territory of a Margrave who was the German equivalent of a marquis). Its history is peppered by Slavic princes, Margraves and the Nazis (trust them to leave their ghastly mark). One of the first concentration camps was set up in Brandenburg Old Town, while the Nazis, under the operation “Action T4”, killed the mentally ill through a euthanasia programme at an erstwhile gaol in Brandenburg. The town was also the base of an aircraft company, which during World War II produced trainers and aircraft for the Luftwaffe and it ended up heavily bombed.

The colourful streets of Brandenburg

Despite such a turbulent past, what lay before us was an idyllic landscape punctuated by lakes and willow trees drooping elegantly across the river, the former monastery church of St. Johannis in its background, cafés selling frozen yogurts, dogs paddling away in the river, canoes and motor boats chugging down the waters of the Havel.

Divided up into three districts – the Old Town, New Town and the Brandenburg cathedral district – the Old Town with its medieval Gothic brick architecture ensnares the imagination. The most antiquated church in town is the parish church of St. Gotthardt. With a distinctive Baroque crest on its tower, the church that is located in Old Town goes back to the year 1140.

A legacy of Brandenburg’s history as part of the Hanseatic League (a powerful confederation of merchant guilds and market towns that dominated Baltic maritime trade between 1400-1800) is the familiar Roland statue in front of the Altstädtisches Rathaus (Old Town Hall). The sandstone knight is a symbol of the town’s independence and civic liberty during the middle ages. Rest assured, my husband was greatly amused by my greeting Roland like an old chum. I had made his acquaintance previously in the medieval city of Bremen further up north.

The Dom St. Peter und Paul (Cathedral of Saints Peter and Paul) on the Dominsel or Cathedral Island

Beetle Boating on the Havel

In the historic heart of Brandenburg is the Dominsel (Cathedral Island) which is difficult not to gape at. The Dom St. Peter und Paul (Cathedral of Saints Peter and Paul) is a gigantic affair in red bricks that started its life in the Romanesque style in 1165. But when it was completed in the 14th century, it looked the part of a Gothic cathedral. The town even retains its old walls along with its four preserved watchtowers. My last memory of Brandenburg is peppered with colourful wooden homes propped up on its cobbled lanes and then, a bizarre thing. Half a timber-framed house standing pitifully by itself.

When I reached Potsdam, the capital city of the state of Brandenburg, I was cast under its spell. Stories of Prussian royalty, atmospheric French, Russian and Dutch quarters and a city’s incredibly verdant beauty tend to do that. Almost the entire city is covered by the UNESCO World Heritage Site status. That should give you a hint of what I was about to witness.

Potsdam has history of import. At one of its palaces, Schloss Cecilienhof, in 1945 The Big Three — Soviet leader Joseph Stalin, British Prime Minister Winston Churchill and American President Harry Truman— met at the Potsdam Conference to negotiate terms and Germany’s fate post WW II. Spending a few hours in the city thrust upon me the fact that I was being unjust to the grandeur of it that was unfolding as I hurtled through it. My first brush was with the Dampfmaschinenhaus, a 19th century pump house that was a masterpiece of mechanical engineering meant to pump river water to the Prussian King Frederick Wilhelm IV’s summer palace, Schloss Sanssouci. Yet why did it resemble a mosque with turquoise blue and gold gleaming? The answer lay in the king’s wish. He wanted the funnel to be concealed in the form of a Turkish mosque. 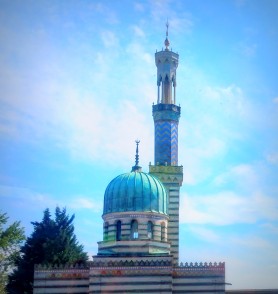 It was my introduction to Frederick’s architectural exotica. The ‘rococo jewel’ in Potsdam’s crown is Schloss Sanssouci, the Prussian king’s famous summer palace designed in 1747. I made a short stop in the Sanssouci Park to scarf down a panini and coffee. It gave me time to luxuriate under a green canopy and live up to the French name of the palace which translates into the thought – ‘without any cares’. To ponder upon the luxury that Frederick lived in, located strategically above a vineyard. It was in sync with his Romantic thoughts of harmonising man with nature. Lakes and fountain, temples and follies – they came together in the perfect romantic synthesis in Potsdam.

The Neues Palais (New Palace) in the western part of the park is a manifestation of Frederick’s ‘fanfaronnade’ or brag with its Baroque architecture. Also unmissable in the scheme of things is the Historische Mühle (historic windmill) that popped up on a raised platform near the Sanssouci. The king called it the ‘ornament for the palace’.

Even servants lived it up in Frederick’s reign at the Orangery Palace that was built in the style of the High Renaissance. This palace lay on the ‘Road of Triumph’ that led up to the Belvedere. Yes, yet another palace in the northern part of the New Garden.

The perfect build-up to the romance of Postdam are its three charming quarters. The French quarter where the Huguenots (French protestants) found refuge in Potsdam, the red brick house fronts of the Holländisches Viertel or the Dutch quarter where I believe a Dutch could not feel but at home and the Russian Colony of Alexandrowka.

The Russian Colony of Alexandrowka 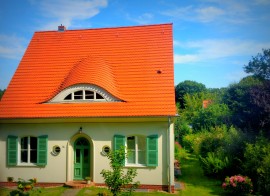 The 13 wooden Russian houses in Alexandrowka, originally home to Russian singers of the First Prussian Regiment of Guards, caught my imagination with their beautifully laid out gardens. Willow trees and fruit trees swayed over the picturesque little cottages that were built to look like a village near St. Petersburg in Russia.

Again, here was a city that suffered deep bombing during WW II and an example of perfect reconstruction and renovation that has restored it to its former glory. Home to the Hohenzollern dynasty, Potsdam to my mind is easily the most perfect place to unwind and bask in the legacy of kings and Kaisers.

(A version of this story was published in The Telegraph India on January 10, 2016)